Are you ready for some serious cuteness?

I'm so excited to tell you about my friend Katie.  She and I have been good friends since 2nd grade.  We've been though it all together: 80's bangs, perms, braces, middle school, years of cheerleading, ASB, EFY, and now parenting and parties.  Katie has a creative talent that I have been leeching off of for years.  We used to make creative quotes and handouts to give out at EFY.  We made many a "dot-lettered" signs for football games and dances back in the day.  But these days I just drool over her home (which looks more like a model home), gawk at her scrapbook pages and DIE over her adorable parties.

So when I got her most recent invitation... 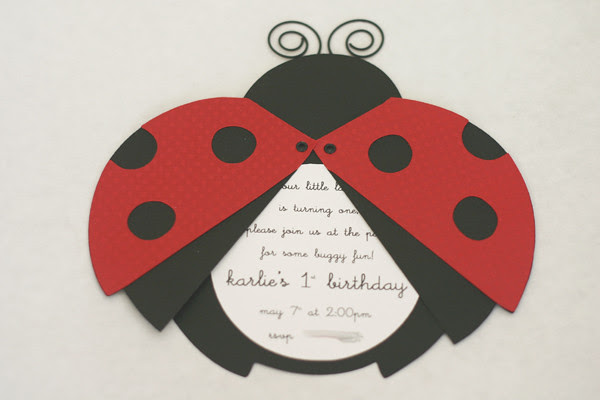 ...to her daughter's first birthday, I knew I had to take notes and ask to share it with the blogosphere!  Thanks for letting us take a peek, Katie!

She asked to borrow my cake stands which were already red, from Christmas and Valentine's.  (See how I made them here).  I was so excited for her to use them because that means they are cool.  Katie only uses cool things! 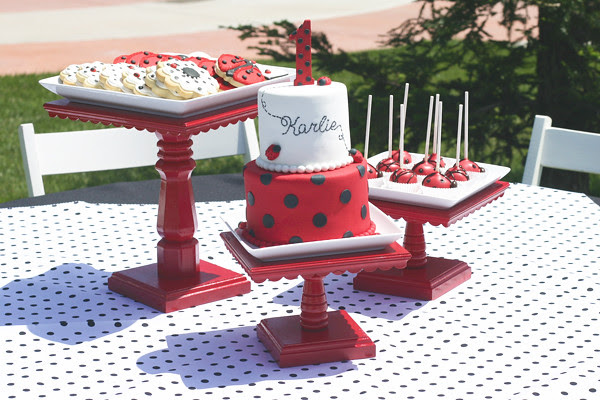 The birthday girl was the star of the show!  Katie made her tutu and wings.  The leggings are killing me! She wasn't the only one dressed up!  Look at the high-chair! 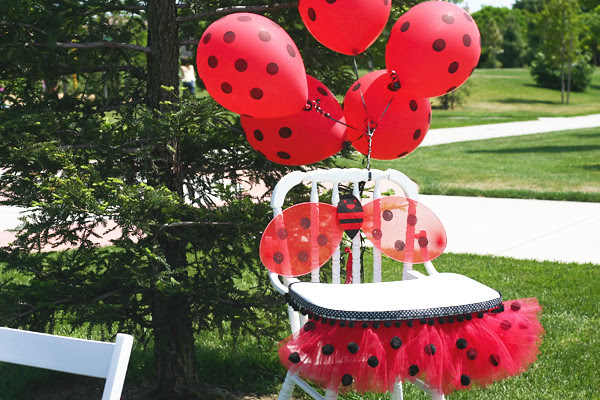 It is all ready for the main event...the cake eating! 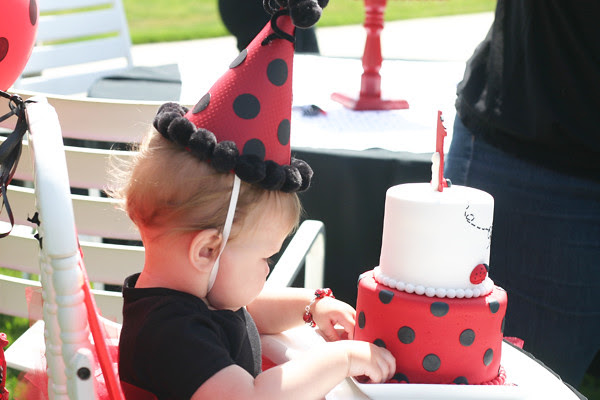 She made the cutest banner that had a picture of her from each month of her first year. 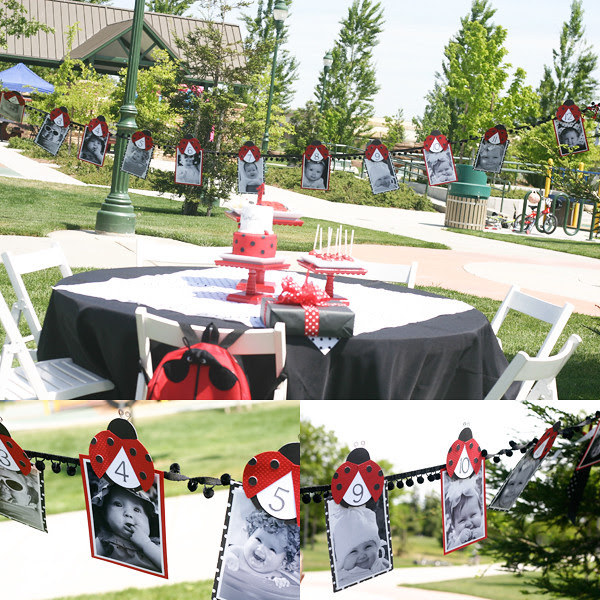 The activities and games planned were perfect because they entertained the whole age range of kids that were there.  There wasn't a dull moment.


1- They played parachute and bounced the ladybugs around.  Katie made these out of loofahs!
2- There was an easel set up where they could paint a ladybug.
3- There was a jewelry making station complete with ladybug beads.
4- She spray-painted a million beans to camoflage some plastic ladybugs that were about the size of a quarter.  They could dig and dig with their ladybug shovels until they found them!
5- The kids had a blast pushing each other around in this!
6- Bubbles are always a hit! 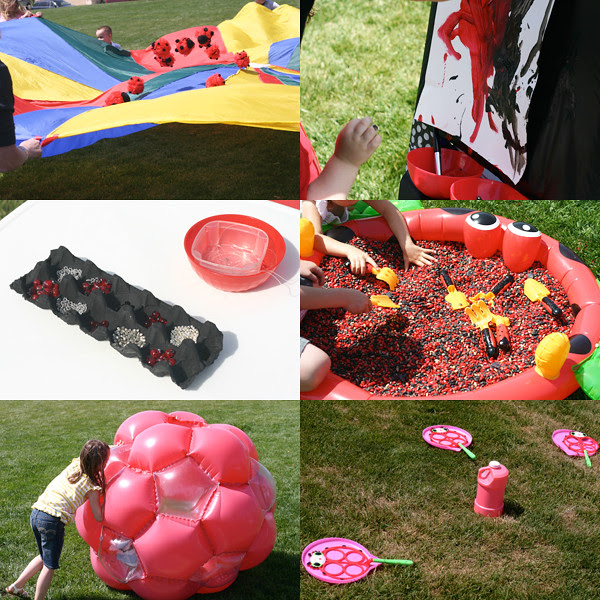 My kids' favorite part was the real ladybug hunt.  Katie made adorable bug catchers and bought real ladybugs at the local hardware store (gardening department).  I thought they might all fly away after the lid came off, but most of them didn't go too far.  The kids gathered round as they crawled all over them and managed to get several in their jars.  They sat there, still finding for about 15 minutes! 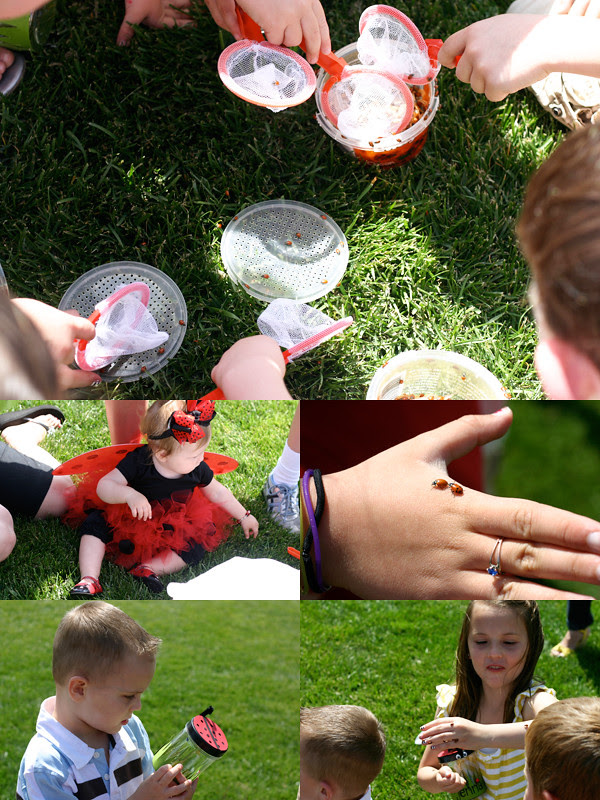 Katie puts a finishing touch on every little detail.  She really thinks of everything and ties it all in.  Let me show you what I mean...
1- Adorable water bottle labels, coordinating table tops.
2- The matching bins of water, tied with polka dots!
3- The banners were darling, but look what they were tied up with!  Coordinating ribbon and ric rac!
4- Ladybug napkins.
5- A matching bracelet for the star of the show.
6- Ladybug bubbles that the kids blew at her right after the "happy birthday" song. 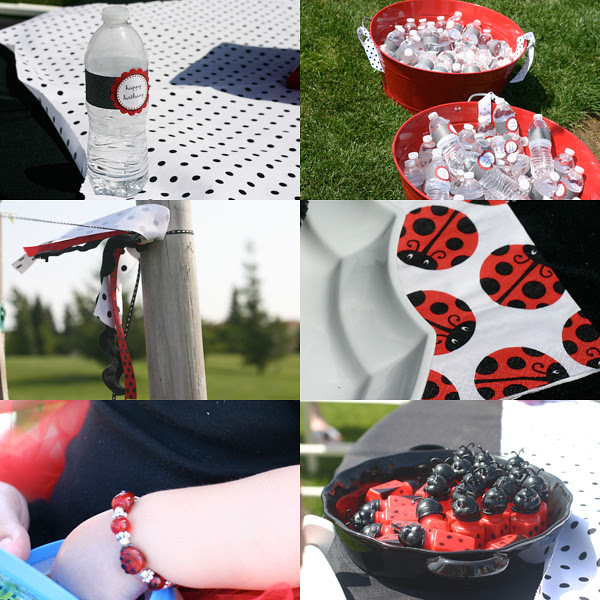 Katie asked me to help her with the food.  This was probably the most flattered and intimidated I've ever been, because her party food is always perfect!  Katie knew exactly what she wanted and I tried to deliver.  She made the cute cupcake toppers and I made some cupcakes. 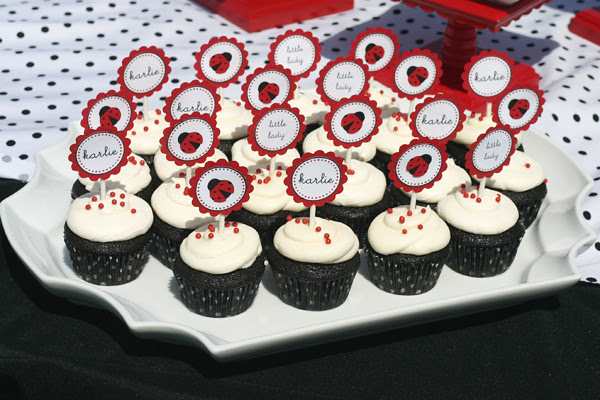 She wanted chocolate covered pretzels made to look like ladybugs.  They turned out pretty fun! 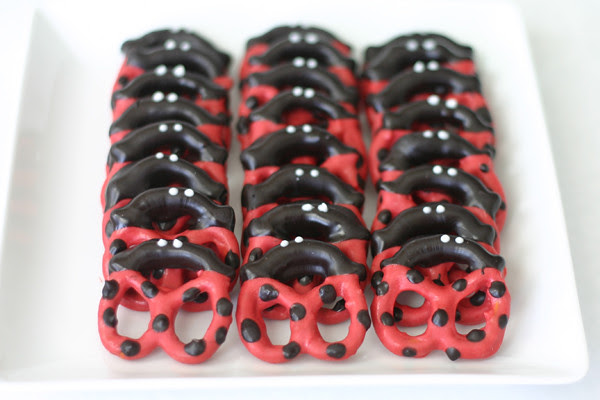 She also wanted some black and red cake pops.  Some were ladybugs and some just had a drizzle. 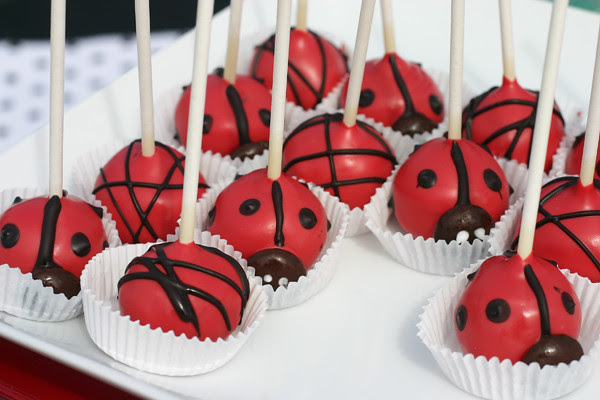 And she gave me a picture (source unknown) of some cookies to make.  I later found that the original designer of this style is here at this etsy shop.  If you're in the market for ordering some, contact their shop! 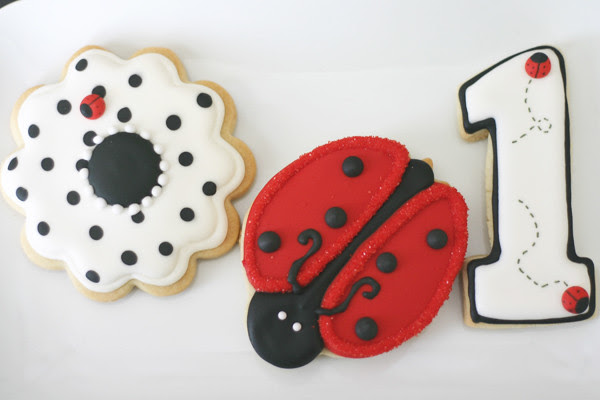 I made the little ladybugs as "floodwork" on parchment and transfered them once they dried.  I did a big red dot, then while it was wet, a black dot for the head.  They melded together.  Then when they were dry, I drew the line and small dots with an edible ink pen.  They were so little (and crunchy) it was almost a little too much like eating a real ladybug! 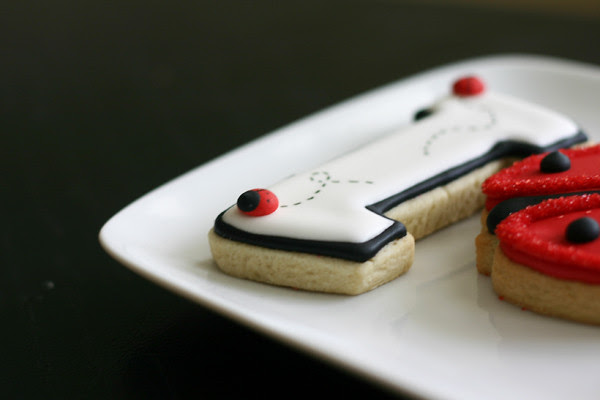 She put some of the big ladybug cookies in these bug catchers (with easter grass) as the favors.
To die for, I tell ya! 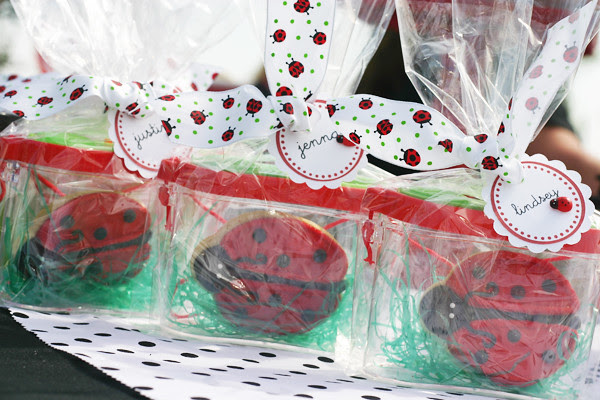 I actually did a ladybug party for my (now 10 year old) daughter's first birthday.  It was nothing like this, yet Katie asked me details about it.  I showed her my vellum invitation and she was kind not to laugh.  Anyway though, no matter how you do it, "ladybugs" is a really fun party theme and I'm sure some of you out there will be inspired to try it out.

Thanks again Katie, for allowing me to share your wonderful party ideas!

I'm linking up to Be Different Act Normal and Tatertots and Jello. 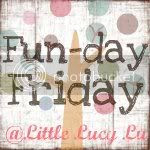